"There's a reason they keep me in the tent furthest from the door."

Arcade was born in Navarro to an Enclave soldier father and civilian mother. His father was killed in combat while on an away mission, leaving a very young Arcade to be raised by his single mother. Also serving as parental figures to the future doctor were the Enclave Remnants, soldiers who had served in the same squad as his father. The Remnants were constantly being persued by both the NCR and Brotherhood of Steel, who wanted any and all remaining Enclave personnel out of their territories permanently, and the group was constantly on the move, eventually settling down in the vast Mojave wasteland.

New identities and lives were constructed by all the members of the Remnants, including Arcade, in order to escape further pursuit and leave behind their pasts. Deciding he wanted to do his part to try and put the skills he acquired growing up among the Remnants to good use, Arcade joined the Followers of the Apocalypse, a highly idealistic, forward thinking group whose goals included educating others about the Great War and spreading charity where it's needed most. Or so they claim.

Arcade spends his time looking for alternative solutions to the ever-dwindling medical supplies the Followers rely on, preferring research to actually practicing medicine, though he won't turn anyone in need of help away should they come calling.

Highly intelligent with a wit to match, Arcade is as quick to share his knowledge on any number of topics with any interested parties as he is to offer a snide, sardonic observation on the situation at hand. There's a slight trace of a superiority complex kindling under the surface; while he won't outright bash someone for being intelectually inferior to himself, he definitely carries himself as a man who is highly educated. Big words are a cheap export from the land of Gannon, and they are assuredly not in small supply. With the curse of intelligence often comes lonliness, and in Arcade's world, that is most certainly the case.

Smarts don't necessarily equal aloofness, of course, and Arcade is never one to be needlessly detached or haughty. Underneath that quick wit lies a caring and compassionate individual; the world may be in shambles but there's a deeply instilled and hard to shake idealism that lives in Arcade. He tends to spend his down time working on ways to the make Freeside a better place, whether that means patching up the occasional gang banger or traveler that comes into the Old Mormon Fort, though more often than not he's content to work behind the scenes. His ultimate goal is to see a truly independent Wasteland with all the smaller settlements losing their dependence on the various factions in the area, and as long as his ambitions coincide with the Followers of the Apocalypse, Arcade is content working with them.

He claims not to be a "people person" but in reality has no problem starting, holding, or even dominating a conversation. Quick with self-deprecating quips, Arcade is a man with a bit of a morbid sense of humor, more than comfortable with the idea that, well, shit happens. He may be all about equality for all mankind but that only gets you so far living in a post apocalyptic world. He's comfortable enough popping a few rounds off when the situation calls for it, but if violence can be avoided, then avoid it he will. In his down time he enjoys reading pre-war books and keeping up on his Latin, though anyone who brings up Caesar's Legion because of it is likely to get a narrowed sideways glance and a bit of righteous indignation muttered through grit teeth. 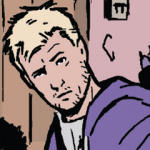