The Seven Thrones gang is a powerful and influential gang in the area, and many denizens of the Boardwalk secretly desire a place within their ranks. Unfortunately for many of the headstrong and capable women of the Boardwalk, these dreams could never become reality due to the Seven Thrones open misogyny and “good ol’ boy” mentality.

After years of rejection from the Seven Thrones, Tomboy Judas had reached her breaking point and decided to do something about it. Thus, the Ocean City Rollers were born. Staking a bold claim to The Rolladium and putting out an open call to the women of the Boardwalk the aid her in defending it. Judas found that she was far from alone in her frustrations as women flocked to the Rolladium to join her. The Ocean City Rollers grew quickly and built a sizeable territory on The Boardwalk and quickly gained the respect that they had so long sought.

Due to their chosen base of operations, it only seemed natural for the gang to find a theme in the roller derby culture of the Pre-War; it only seemed right that warrior women from the ancient world could serve as inspiration for a gang of modern amazons. Taking to the streets on roller skates and modified sports equipment, the Rollers take no guff from anyone and are swift to prove that women can be just as intimidating as their male counterparts.

The Rollers are still relatively new to the Boardwalk and they still have much to prove if they wish to become a permanent fixture of Ocean City. As such Judas has been aggressive in her girls claiming territory and holding it against all comers. With brutal ferocity and frightening coordination, the Rollers are spreading their influence wherever they can gain a foothold. What amount of territory will satisfy them? When will Judas decide that enough is enough for her gang? Will anyone be able to stop their growth? Does anyone even want to? These are questions that do not seem to have clear answers and Judas isn’t talking…

The Ocean City Rollers have adopted the look of classic roller derby girl groups: helmets, knee pads, jerseys, and gloves all apply. When not done up for "battle", the members shun the traditional look those haughty Seven Thrones housewives are forced to sport, choosing instead to wear whatever they please as long as it doesn't interfere with their ability to zip across the Boardwalk. The only rule is skates must be worn at all times, and many of the members have taken to modifying or decorating theirs as a sort of personal trademark. 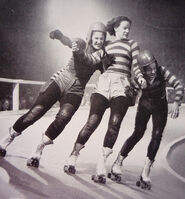 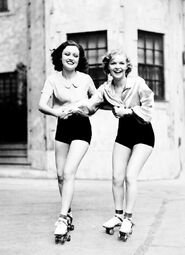 Add a photo to this gallery
Retrieved from "https://duck-and-cover.fandom.com/wiki/Ocean_City_Rollers?oldid=4325"
Community content is available under CC-BY-SA unless otherwise noted.