"Trick or treat, smell my feet, give me something good to eat!"

Taking their name from the misfortune they bring upon The Boardwalk, the Black Cats are a gang that dress up in gaudy horror costumes and call Trimper's Haunted House as their home. None on the Boardwalk can seem to recall when exactly the Cats first appeared, or where they came from, and that is just how the Cats want it. Surrounding their history in mystery and superstition, Six Deep and his cronies never give the same answer twice when asked. The only certain fact about the gang is the fact that they revel in the taboo and are a force to be reckoned with

The 'Boils' and 'Ghouls' of the Black Cats may seem campy, but no one laughs at their antics, they're well known as cannibals that take survivors only to torture and feed upon.  No one ever crosses a Black Cat's path without finding themselves with bad luck, after all. Their methods are brutal and debauched, but this nasty reputation plays directly into the gang’s mystique. The only saving grace for the Boardwalk is that the Cats are rarely seen outside their Haunted House during the day and staying safely hidden in their homes when darkness falls; so long as a troupe of “trick-or-treaters” come to call, of course…

The Black Cats have been relatively silent of late. They still prowl the streets at night and maintain their presence on the Boardwalk, but they seem to be up to something. Based on the gang’s style and motivations, this new more reserved approach only seems more frightening and ominous to the residents of the Boardwalk. Was that Six Deep’s goal, or is something even more sinister in the works? Only time will tell…

As a gang so obsessed with the trappings of the pre-war pop-culture occult, rituals and “holidays” are very important to the Cats.

Every member, without exception, is subjected to a particularly brutal initiation ritual before becoming a full member. The Cats welcome the initiate with open arms and treat them to a rip roaring party, but when the initiate has relaxed and taken this new acceptance to heart they sneak up from behind and knock them out cold. The unconscious hopeful is then drug to a graveyard outside of town and buried alive in a shallow grave. The initiate must then regain consciousness and desperately claw their way through the dirt and into the open air. Then, and only then, are they accepted as one of the gang. Those that do not survive... Well, they clearly were not worthy, were they...?

Probably the most important event of the year is the “Feast of the Dead.” The Feast occurs every October 31st and, in the mixed tradition of pre-War Halloween and the pagan festival of Samhain, the Black Cats prowl the streets for victims. More than any other night of the year, it's an unspoken rule on the boardwalk to stay inside until day comes and never open your door to wayward trick-or-treaters. Even the boldest gangs know better than risk wandering the streets on that harrowing night.

The Black Cats have no official dress code, but members are fond of capturing the spirit of Halloween in their day-to-day wardrobe. Masks and costumes are all part of the norm, and the more frightening or chill-inducing the look, the better. 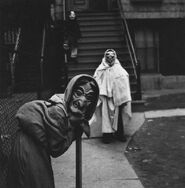 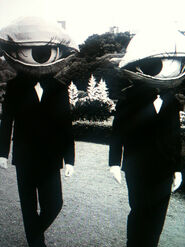 Add a photo to this gallery
Retrieved from "https://duck-and-cover.fandom.com/wiki/The_Black_Cats?oldid=4373"
Community content is available under CC-BY-SA unless otherwise noted.